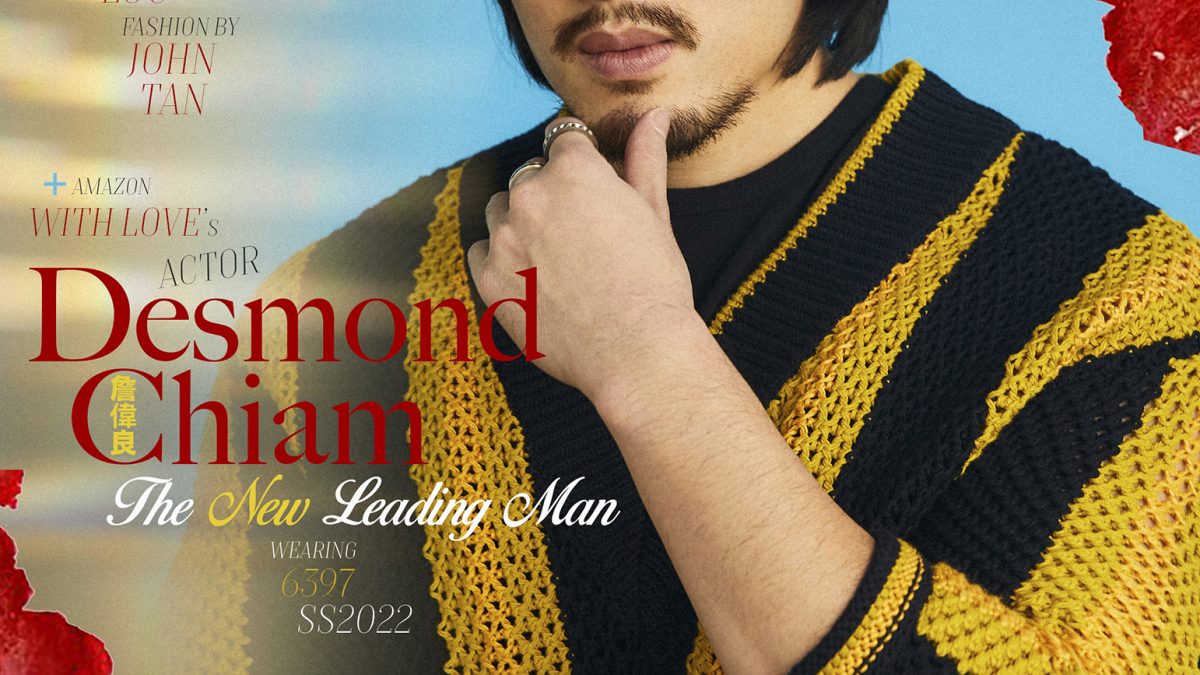 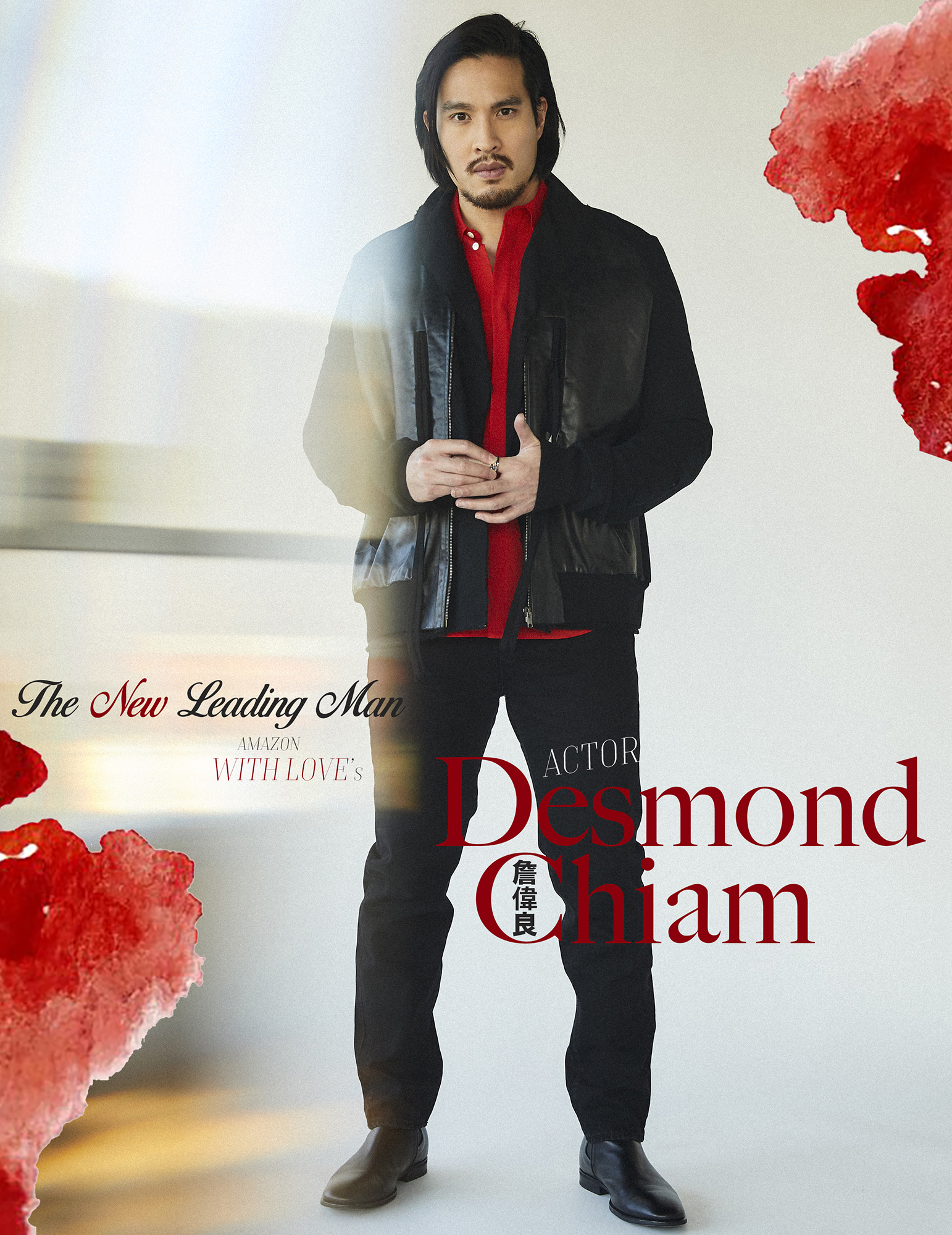 
Australian actor Desmond Chiam recently starred in two hit shows: Marvel's The Falcon and the Winter Soldier and Amazon's With Love created by Gloria Calderón Kellett. With a team of Asian talent, photographer, and stylist — Visual Tales discussed with Desmond about the importance and his experience of representation in media, and the path that led him to his current career. 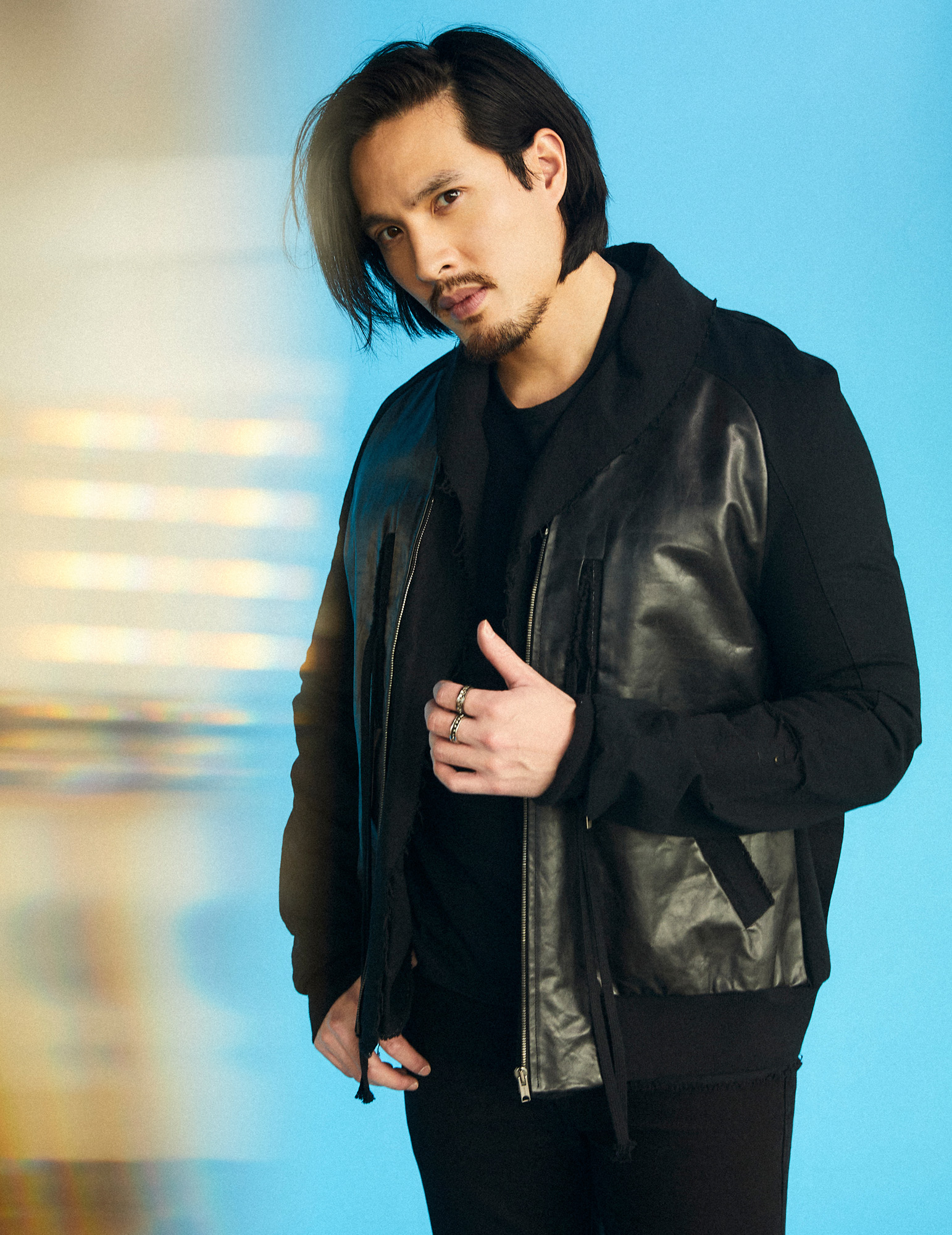 Yinan Xia: So great to meet you Desmond. I heard that you have lived in both Australia and Singapore. Could you tell us a little bit about your upbringing and did you experience any culture shock moving to LA?
Desmond Chiam: Australia is pretty similar to California in a lot of ways. Both are coastal locations and the culture is more laid back. I was in between Singapore and Australia a lot because my dad still worked in Singapore. I think bouncing around like that helps you set up home anywhere.

YX: What made you switch from law school into the creative field?
DC: I was studying law in Australia, the particular campus was really secluded and everyone was just studying law. When I moved to UC Irvine in 2008, the campus was a lot more mixed and I met those in creative fields like photographers, videographics, directors, and dancers – it was all pretty mind blowing for me. I eventually got into dancing because of attending UC Irvine. Around 2008, there wasn’t a single team from SoCal on America’s Best Dance Crew that didn’t have at least one person from UCI.

YX: I remember that period of time when SoCal dancers dominated that competition. There was also a boom in Asian-American YouTube videographers who were from SoCal like Wong Fu Productions.
DC: This was around the time I was at UCI when the confluence happened and when Wong Fu Productions was coming up. My first dip into acting was this music video I shot for Jennifer Chung, who’s my wife’s friend and on the same dance team as her. The Wong Fu team went to high school with Jennifer and showed up to say hi. So it’s a very small world! 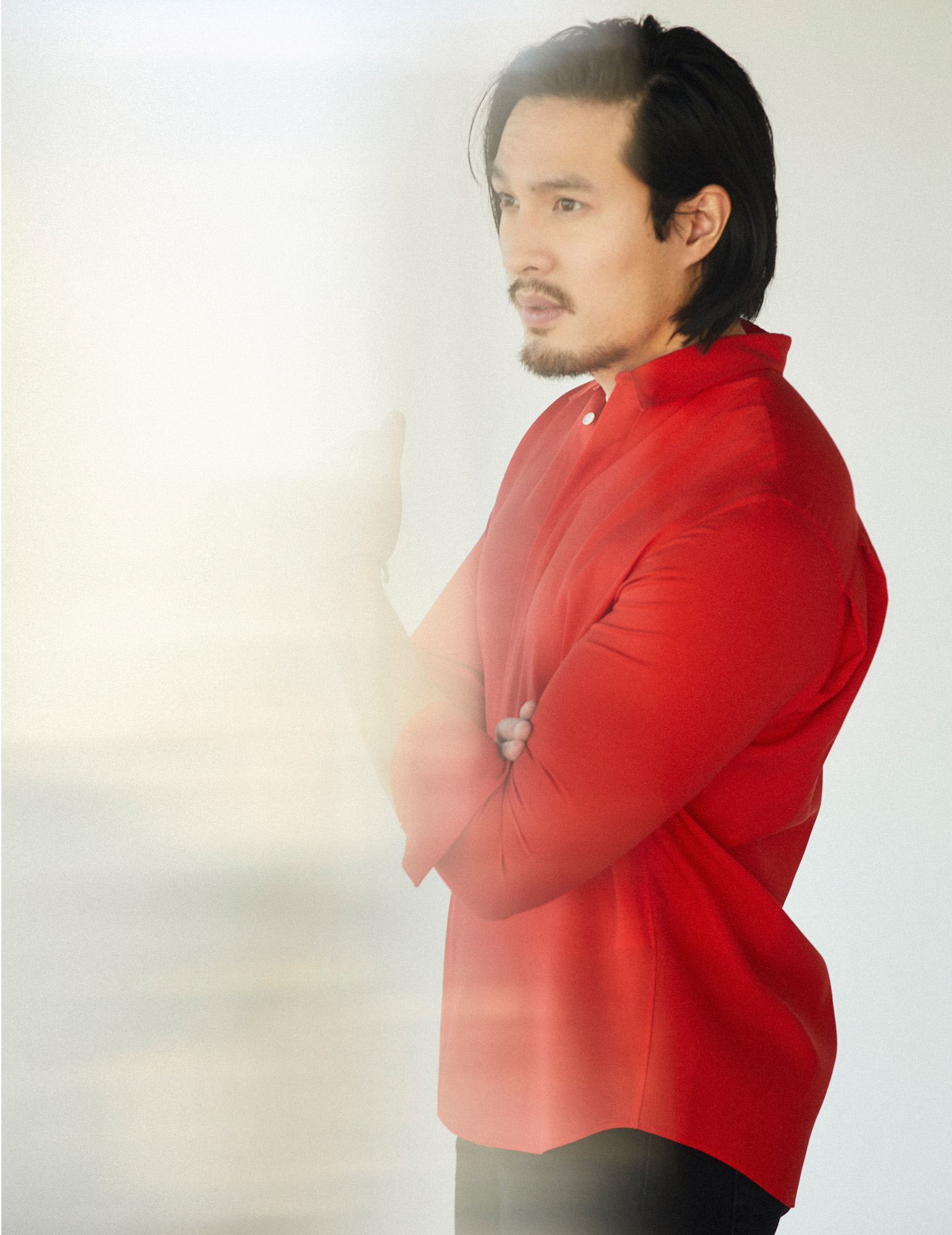 YX: Growing up, when was the first time you really felt like you've truly been represented on screen?
DC: That’s a tough one and I have two answers for this. The first and obvious answer is well known Asian actors like Jackie Chan, Stephen Chow, and Bruce Lee. But those actors are from a different generation and only represent me on a physical appearance level. I think the first time I really felt represented on a cultural level was from an episode of Castle. The storyline was about these two Asian American brothers and the younger brother who didn’t want to do anything with the older brother’s world. It was like seeing two completely different Asians on screen and bringing some Western experience to it. A lot of us are second generation, we’re not of the countries our parents are from, but we’re also not of the countries we were born in. And to see a network TV represent us was very impactful on a personal level.

YX: I’m actually a huge fan of Castle and really looked forward to discussing Asian representation in Western media with you. One of my favorite movies is The Half of It by Alice Wu, and I saw that you were just hanging out with Leah Lewis the other day! I’m also a big fan of Gloria Kellett’s work like One Day At A Time as well as the show you are on right now With Love.
DC: Leah would be thrilled to hear that! And Gloria is a super star as far as being a boss doing representation right and being so sensitive to everyone’s story. She’s truly open to hearing our concerns and making a safe space for us to say something when it comes to representation. 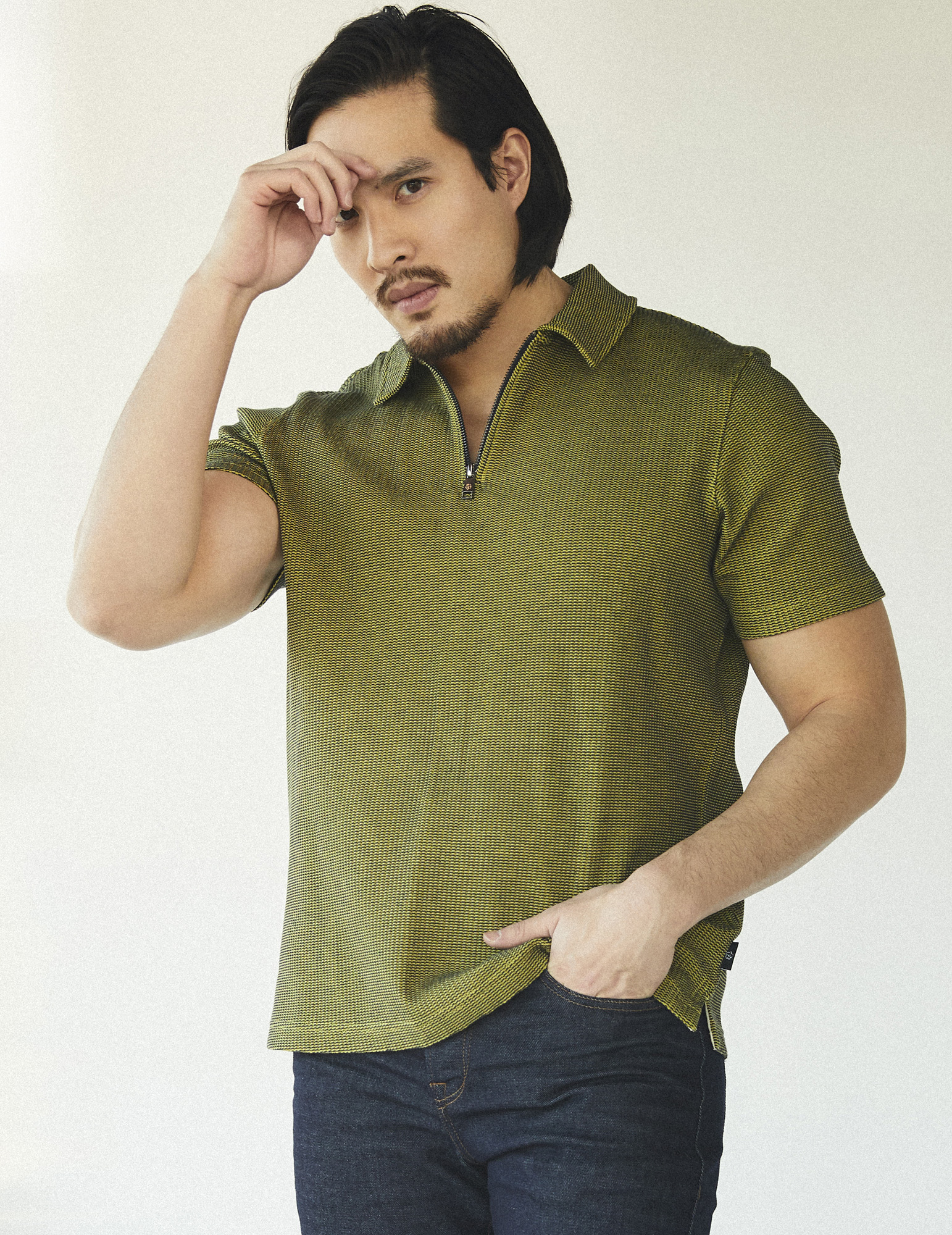 Zipper polo shirt and denim jeans, both by TED BAKER 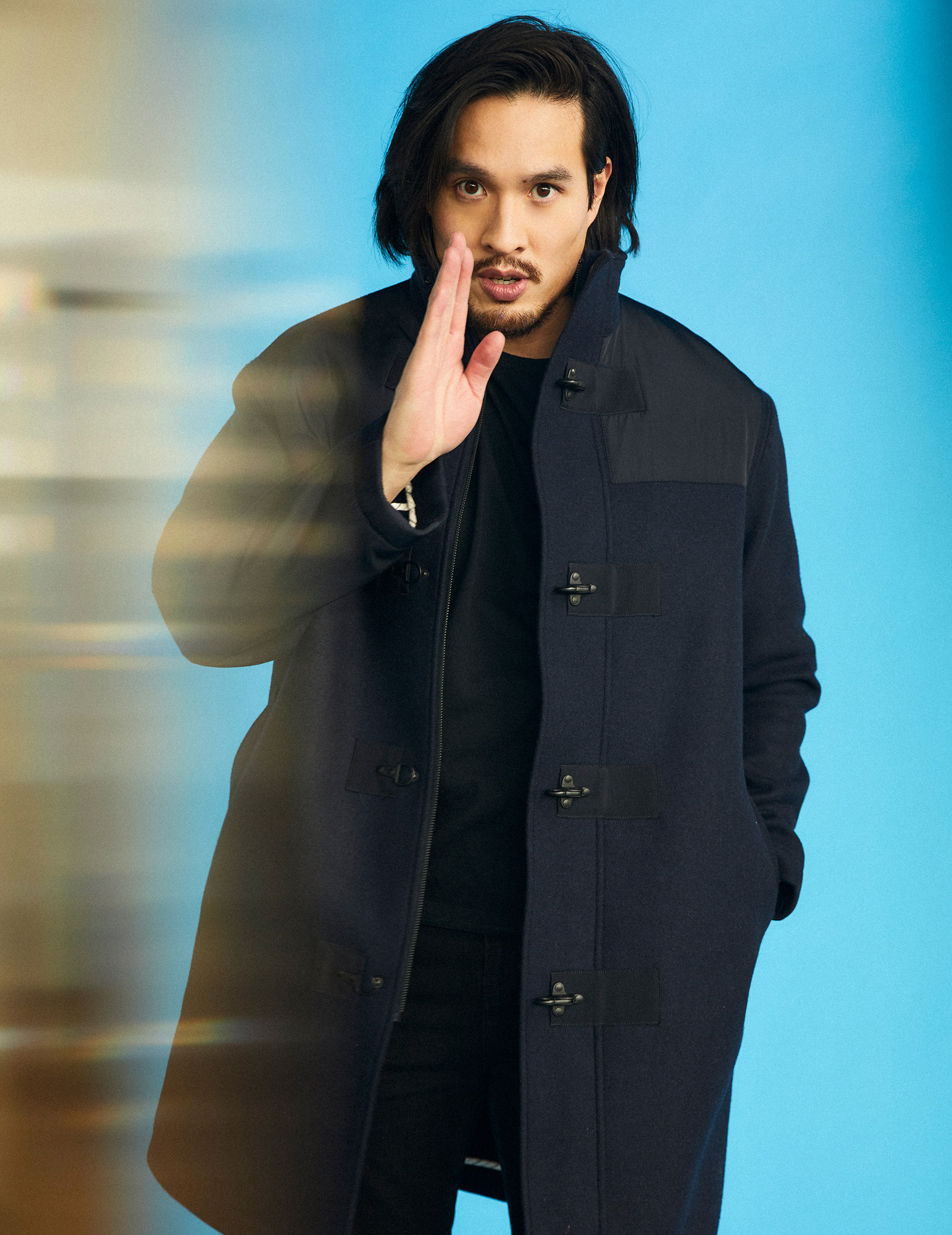 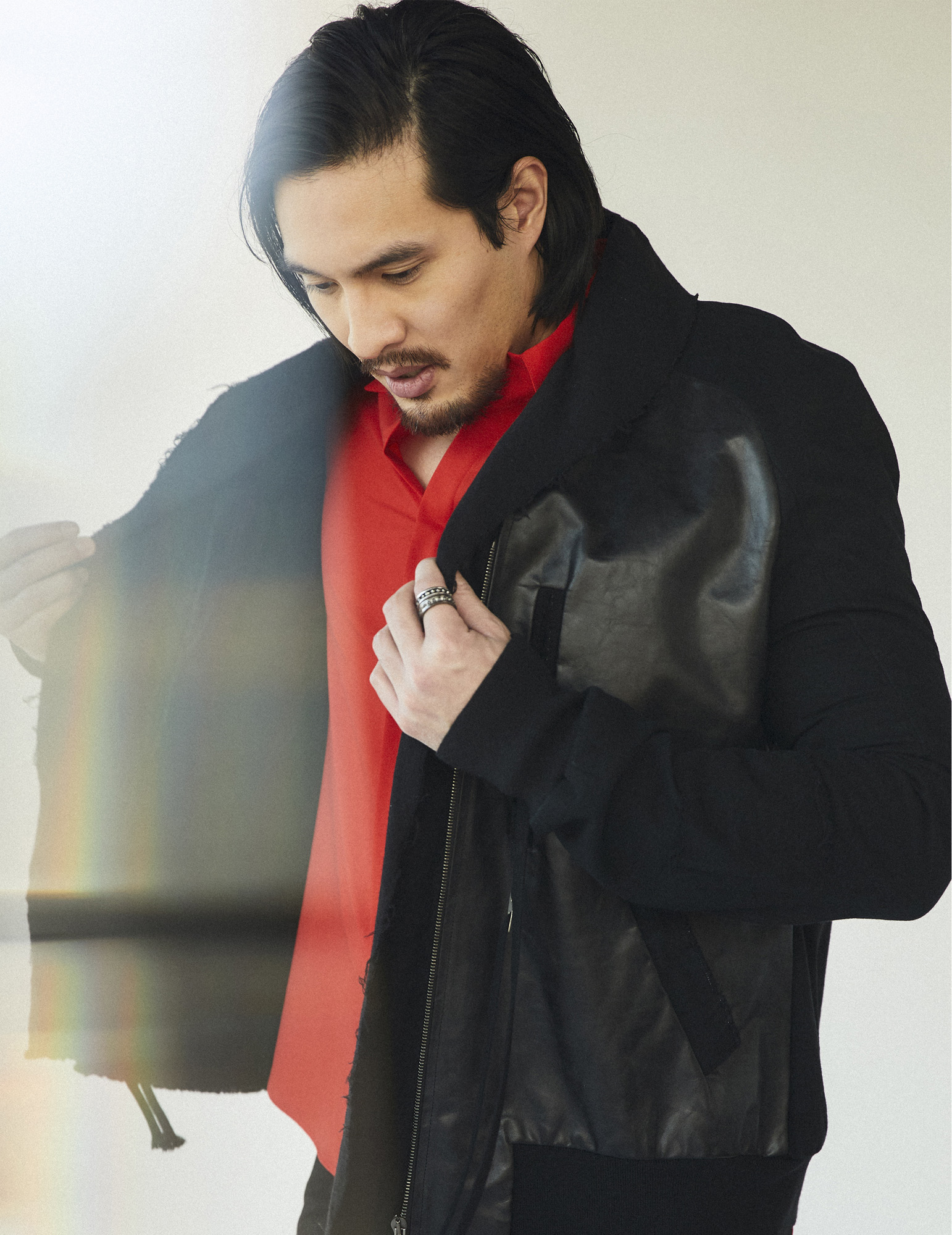 YX: What were your thoughts about your character Nick on the show With Love?
DC: I love Nick, because he’s hard not to love. He’s just this dingus trying so hard to be chipper, and he has an insane libido. Obviously we don’t get to see this “gets all the girls” type represented in Asian men a lot. There’s a moment in episode three where they bust the trope of desexualized Asian men which is nice to have both as an actor and on a personal level. There were also instances where I was able to work with Gloria on some concerns I had because people who didn’t grow up with our struggles wouldn’t necessarily be sensitive to it. Spoilers: Nick was the only character that doesn’t end up romantically with anyone. That was definitely something I had in the back of my mind that it was playing into a possible trope. But Gloria reassured me that they have plans for Nick. And right now it’s more about getting to that level of emotional maturity for his character. Let’s be frank, the dude still has a lot to work on still.

YX: I agree, Nick still has a lot to grow when it comes to emotional maturity.
DC: So many of us think that the answer to represent Asian men being desexualized was hyper masculinity, which is often represented problematically through emotionally stunted growth. 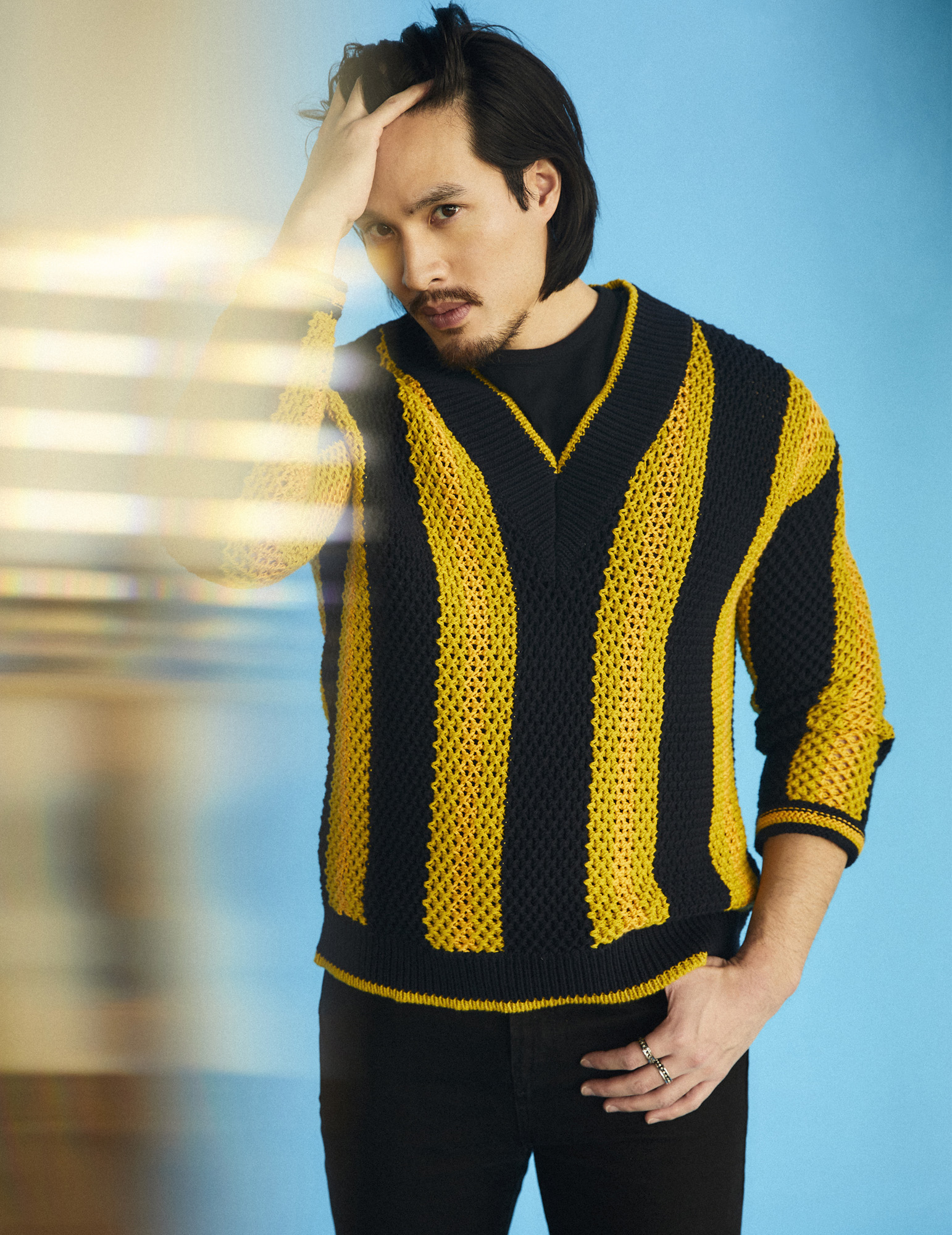 YX: Another big show you were recently on was The Falcon and the Winter Solider. Who was your favorite Marvel character growing up?
DC: I took the part in The Falcon and the Winter Soldier because it was in the Captain America corner of the universe even though the character didn’t have a major role. Captain America was a big part of my childhood. What better idol than a guy whose power is being peak human. When my best mate passed away in an accident, I didn’t have anyone I felt comfortable talking about that to, and I looked to Cap because Steve Rogers’ mate died and he became a superhero. From there I rebuilt my mind and body, with Cap being the totemic force that kept me on the straight and narrow.

YX: Were there any memorable experiences from the Marvel set?
DC: Oh, so many so many. Getting to hold Cap’s shield was up there. Getting the shield thrown at me is up there too.

YX: They threw a metal shield at you?!
DC: The real shield is metal but there's multiple versions. The one they threw at me was a softer rubber. There’s also backups of all versions as well. 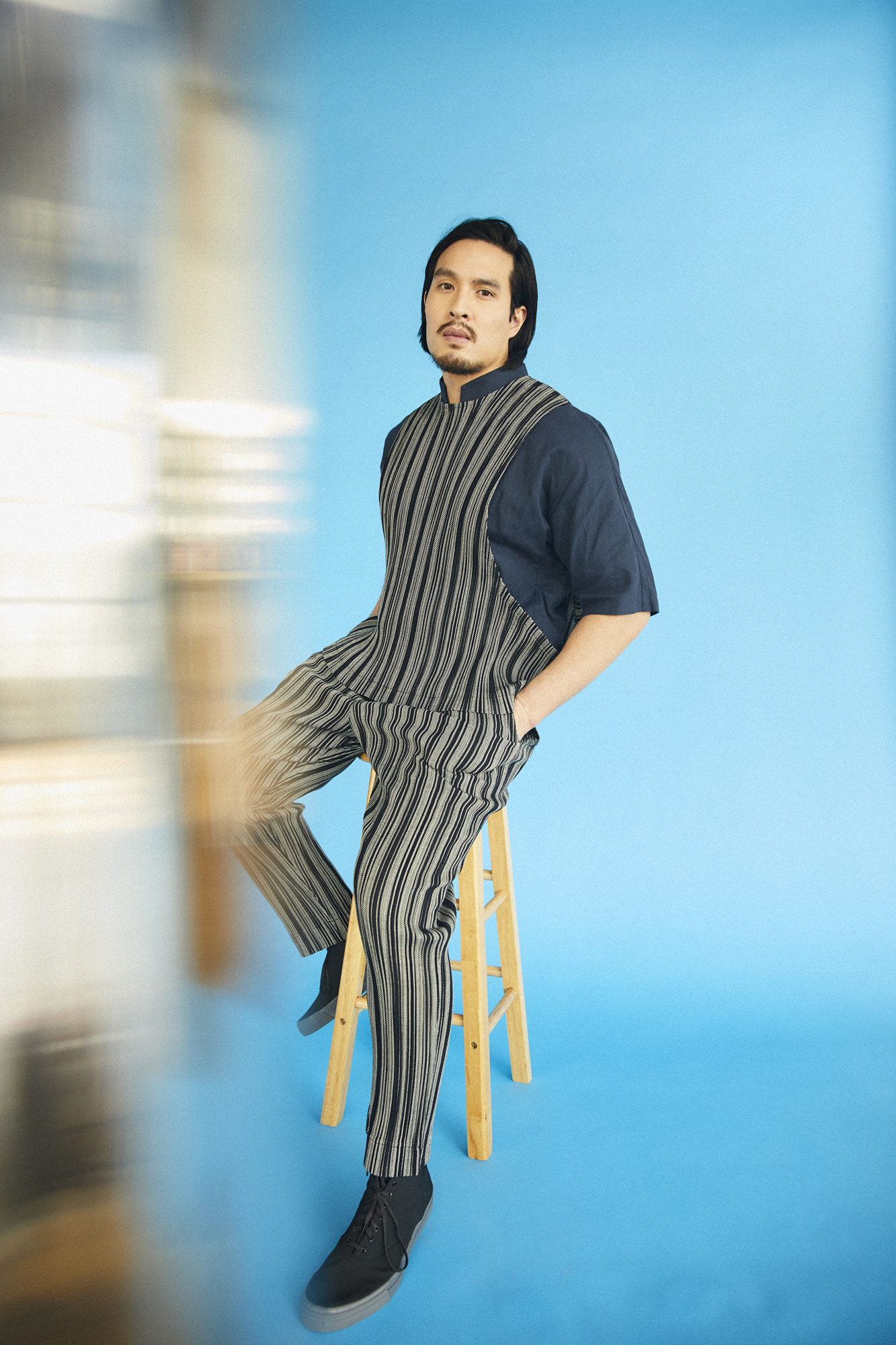 YX: Could you talk about some of your upcoming projects?
DC: I can only talk in very broad strokes about it right now. We have Partner Track dropping on Netflix. Arden Cho, who is a legend if we’re talking about old school SoCal days, she’s leading the series. It’s based on a novel by Helen Wan, and Georgia Lee as showrunner. It’s an Asian American team bringing you a story that I think a lot of Asian women will identify with. I’m very happy to be playing a small key role in that. Then there’s a comedy film, yet to be named, directed by Adele Lim, led by Ashley Park. It’s a crazy comedy and the complete opposite vibe of Partner Track, so it’ll be fun to see the reactions from people on the two different projects.

YX: If you could play any type of character, what would it be?
DC: I would play a cowboy. I think we can get some more Asian cowboys on screen. Steven Yeun led the charge with The Magnificent Seven. I really want to play one of those old school cowboys who really doesn’t have a lot to say other than with their stick shooter. 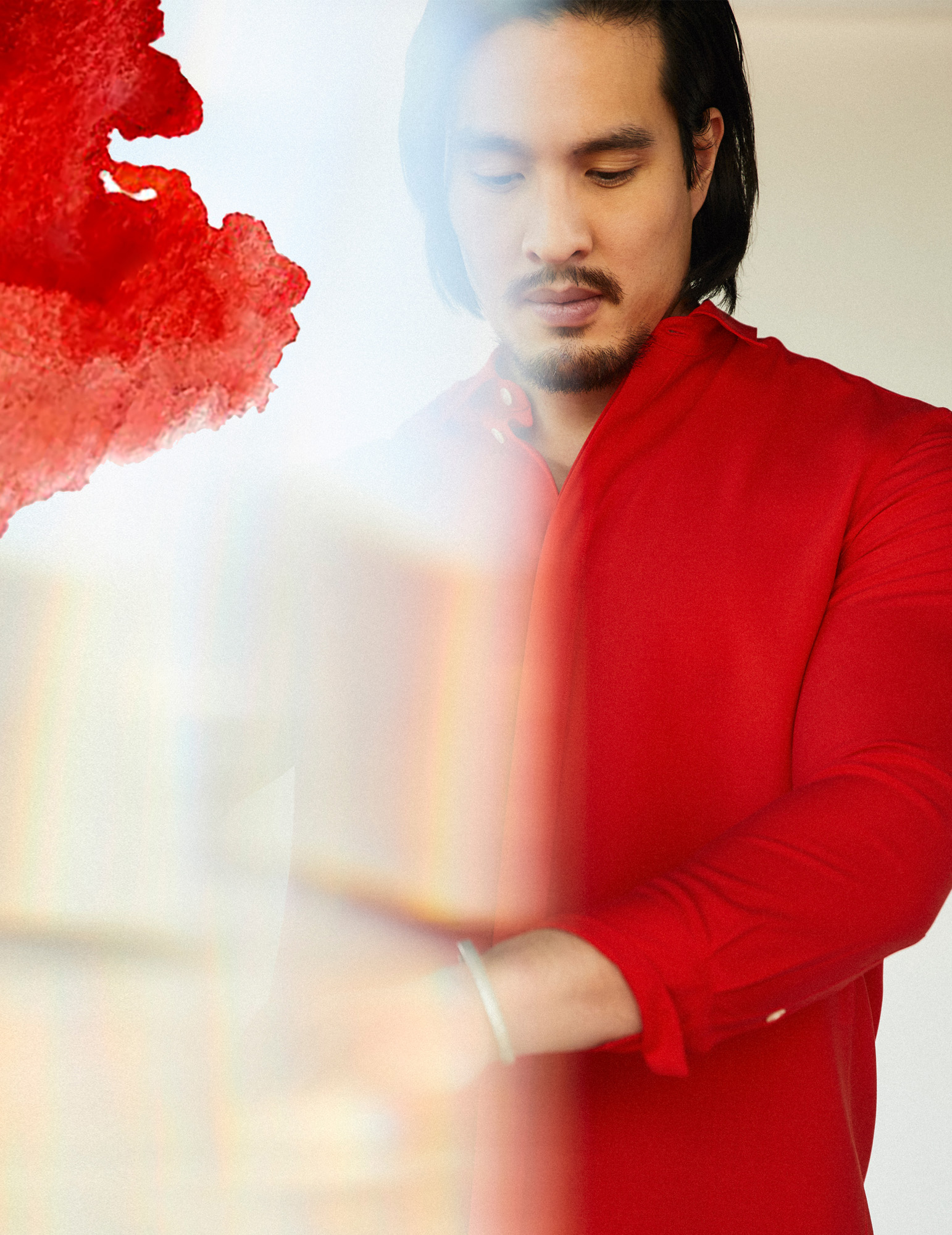 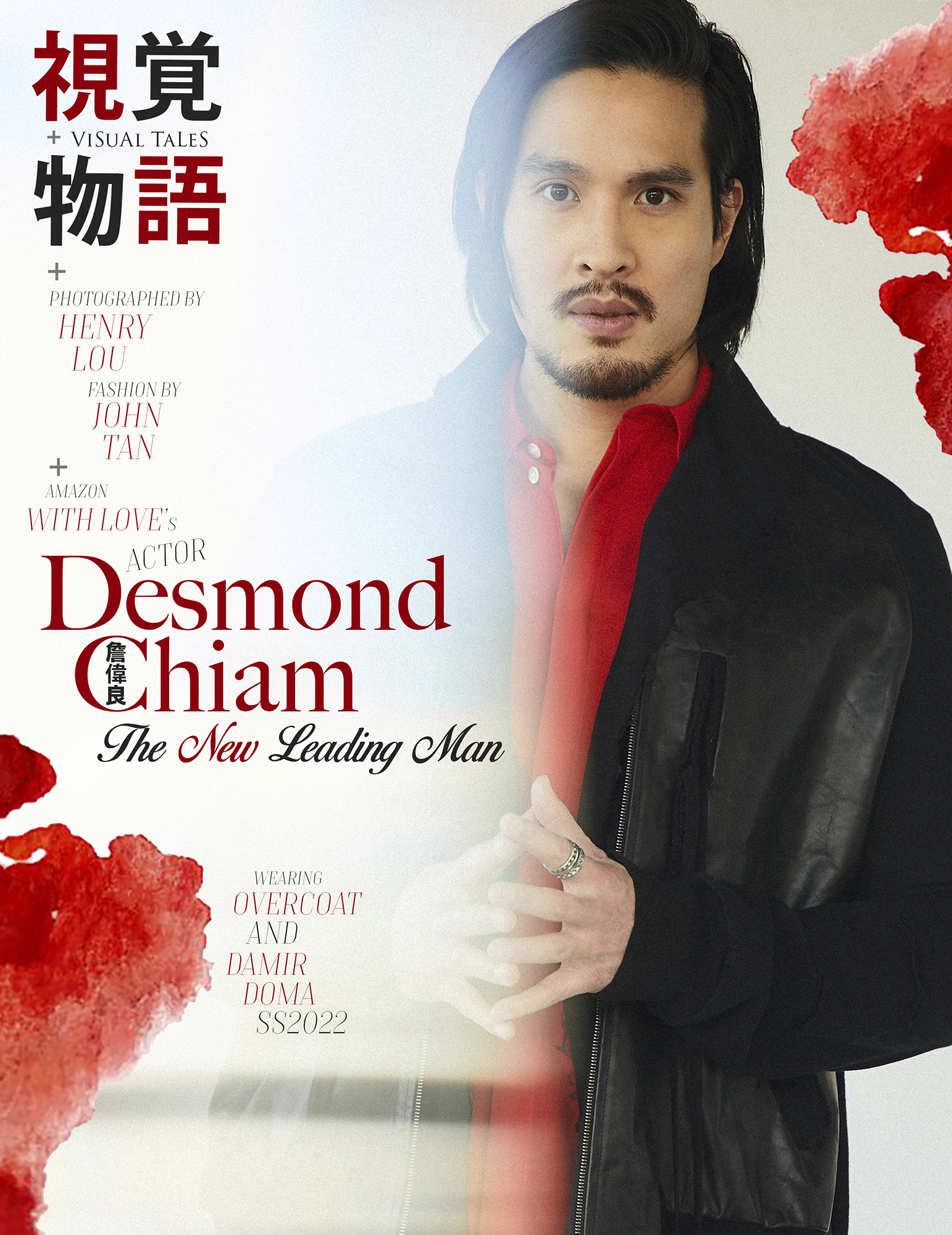